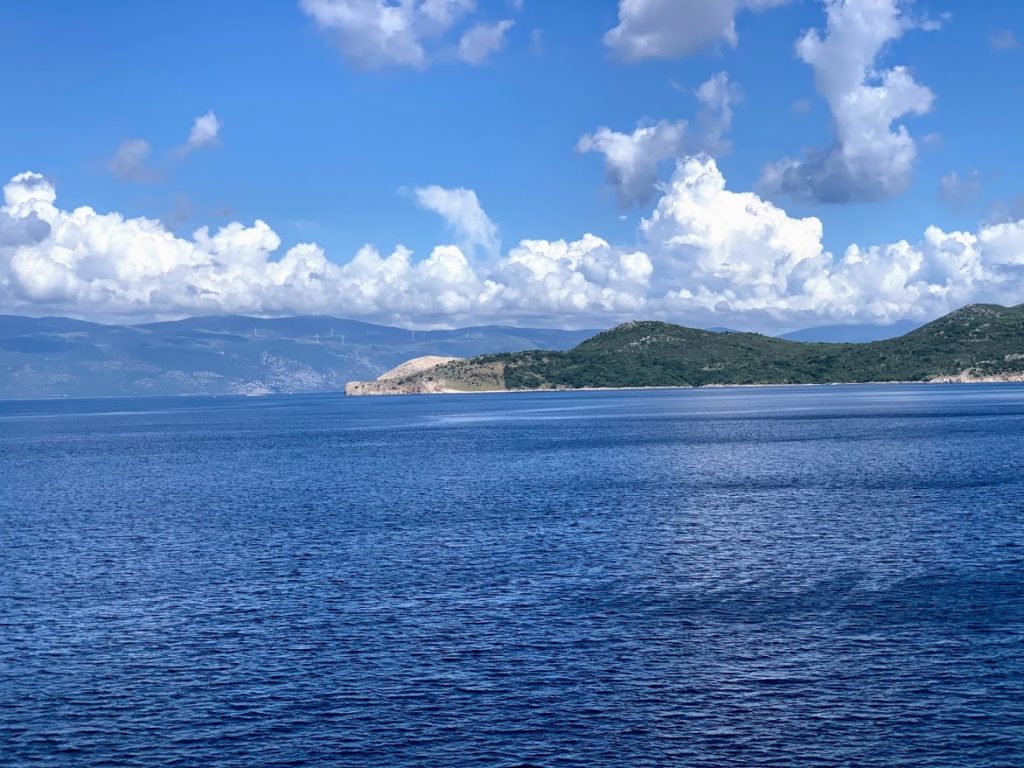 Tucked in between the beauty and serenity of the Istrian Peninsula to the north and west, and the intricate Dalmatian coastline to the south, the Kvarner region is home to a splendid archipelago. Fishing ports, towns with narrow streets and delightfully compact centers, lush subtropical gardens, and a coastline dotted with sandy beaches beckon to travelers along Croatia’s northern region.

Deep channels and ports easily permit large capsize shipping vessels to call, as well as ocean liners, bringing a mix of traffic that is both dynamic and economically important, but also convenient for visitors to the gulf. Challenging mountain peaks rise next to pebbled beaches, reflecting a lovely lifestyle that bears exploration with great rewards. 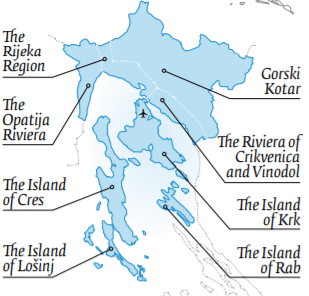 The Kvarner Riviera, boasting a coastline along Rijeka, is the busiest port in the Adriatic. Attracted by the mild climate, the extraordinary vegetation, and the soothing sea, European royals and wealthy families established homes as retreats in the late 19th century. Health spas, luxury hotels, and fine dining became additional attractions for well-heeled tourists. The area continues to offer a luxurious stay in five star accommodations, encouraging visitors to participate in diving, cycling, sailing, fishing, wakeboarding, and exploring the archipelago. Abundant sea life, shallow caves, and fascinating wrecks offer divers an experience of a lifetime in warm, clear, inviting waters. The roads linking coast to mountain provide exhilarating rides, as well as beautiful hikes, throughout the region.

The Kvarner archipelago is blessed with some of the country’s most delightful islands. Krk, Losinj, Cres, and Rab are the largest, with ferry service, charming villages, and an assortment of water sports, restaurants serving fresh seafood and local fare, and pubs delivering refreshing drinks, including locally produced wines of exceptional quality and value.

A fabulous introduction to Croatia’s coastline awaits arrivals from Zagreb, delivering a memorable, pleasant tour of authentic Croatian civilization. Experience everything from strikingly intact Roman ruins (such as Archaeological Park Tarsatic Principia Rijeka and Archaeological Park Mirine-Fulfinum in Omisalj on Krk Island) and monuments (such as Roman arch in Rijeka), to contemporary nightclubs and upscale dining and shopping, touring this truly unique geographical region of Croatia.

If you’re driving to Kvarner from Zagreb (read Foodie Guide to Zagreb), Gorski Kotar is on your way there. Stop at Gorski Kotar for centuries-old karst caves and endless forests. Pristine nature is the home of spring producing finest drinking water, crystal clear rivers, and beautiful waterfalls and lakes. Risnjak national park is a gateway to pure nature, with huts for wildlife watching, like wolves and bears, and overlooking the Kvarner Bay.

The small village of Fuzine, where Hotel & Restoran Bitoraj is located, draws visitors to Bajersko lake and Vrelo dripstone cave. Even at summertime peak, Gorski Kotar provides a heat refuge with  cool temperatures.

Restoran Bitoraj offers a taste of Kotar with with its menu of local ingredients, such as wild fruits and mushrooms, and hunting specialties. Hearty soups, indigenous dishes such as homemade roasted blood sausages, and grilled pork and trout. Hunting  dishes, like deer, venison, boar, and bear are what Bitoraj is famous for and makes this restaurant unique in the Croatian traditional gastronomy. Forest fruits and forest blueberries are indispensable in desserts, primarily the famous Gorski Kotar strudels. The rich and varied menu is complemented by traditional preparation and distinctive gastronomic experience. Here are the exotic and delicious dishes we sampled.

Cold plate with homemade cheese, homemade bacon, wild pork, and prosciutto made of deer and bear 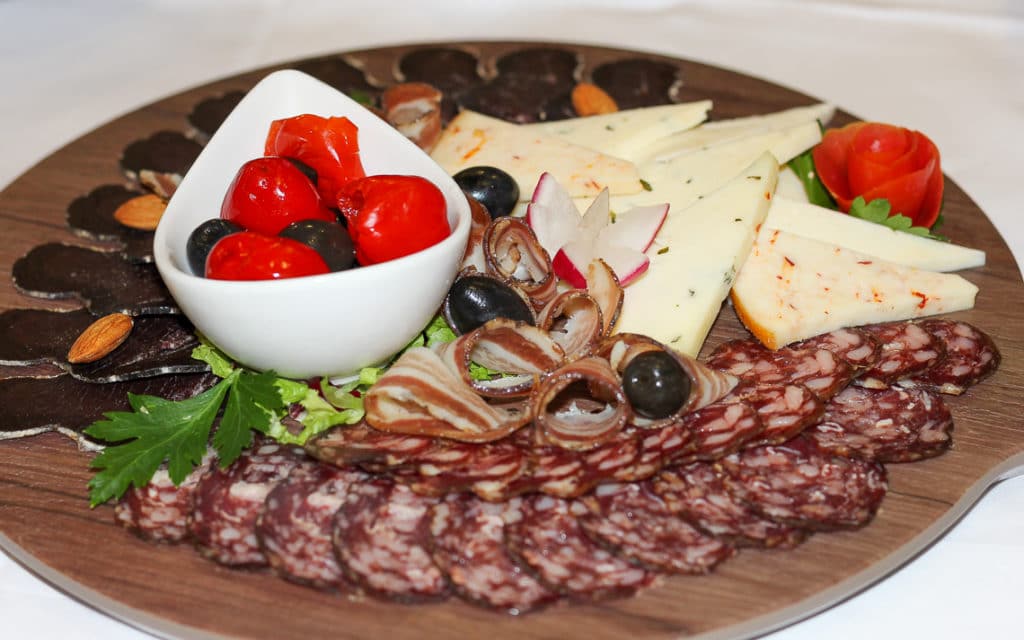 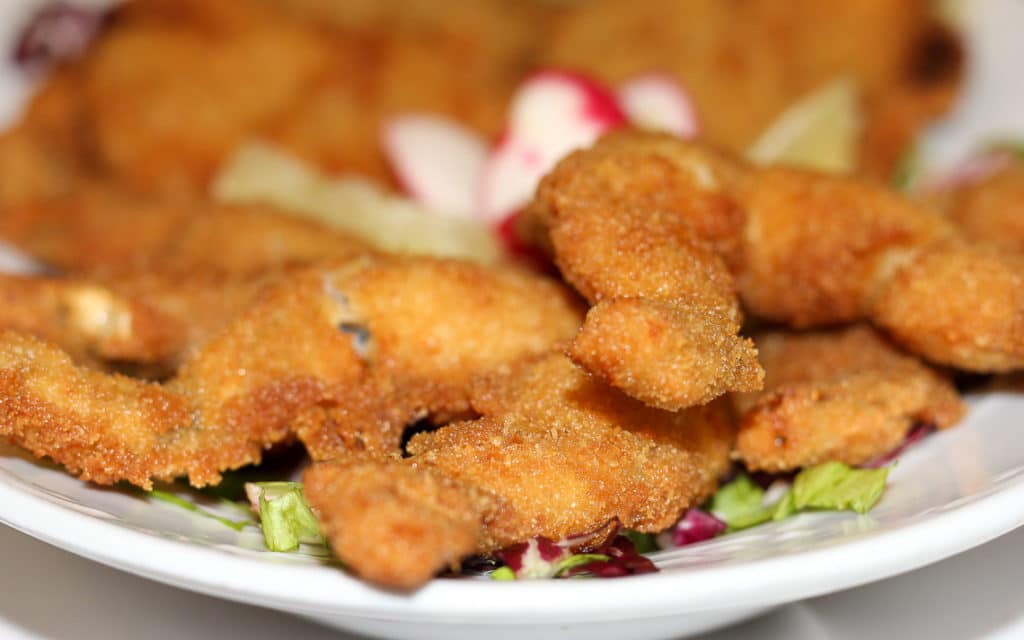 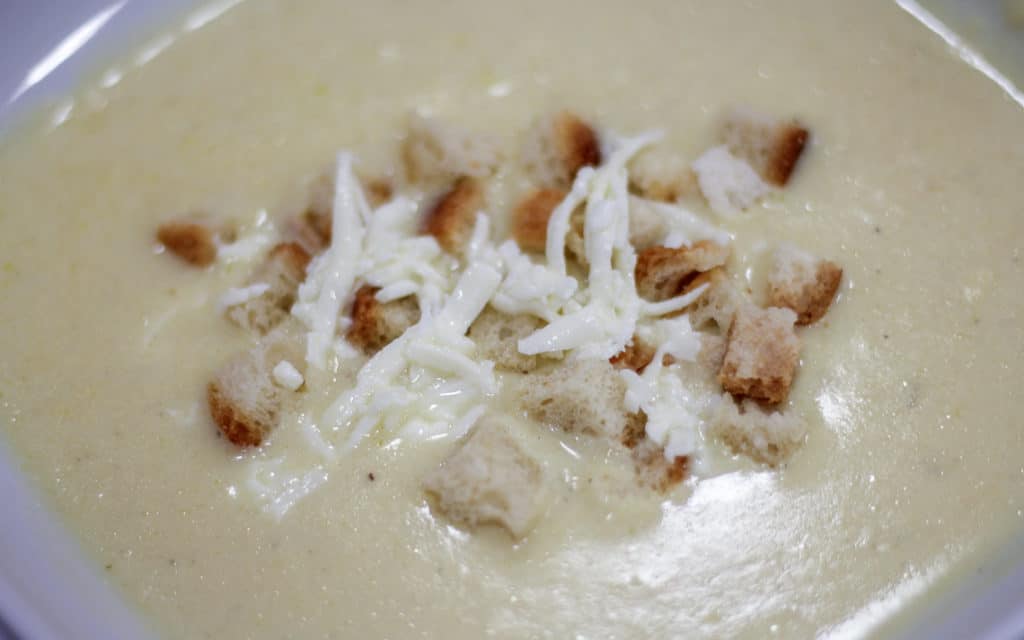 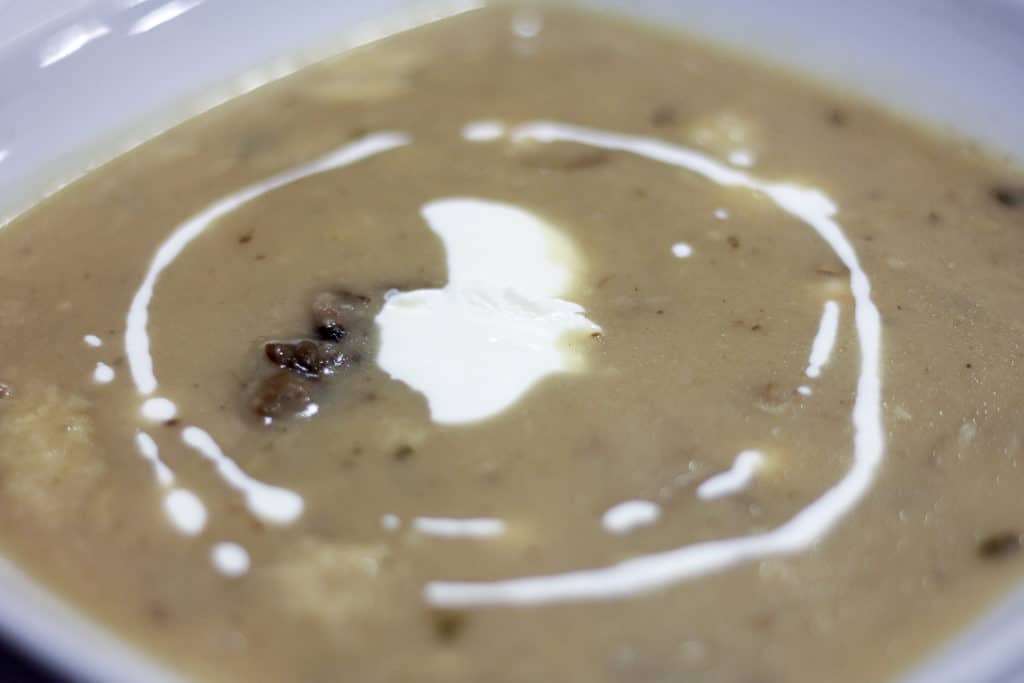 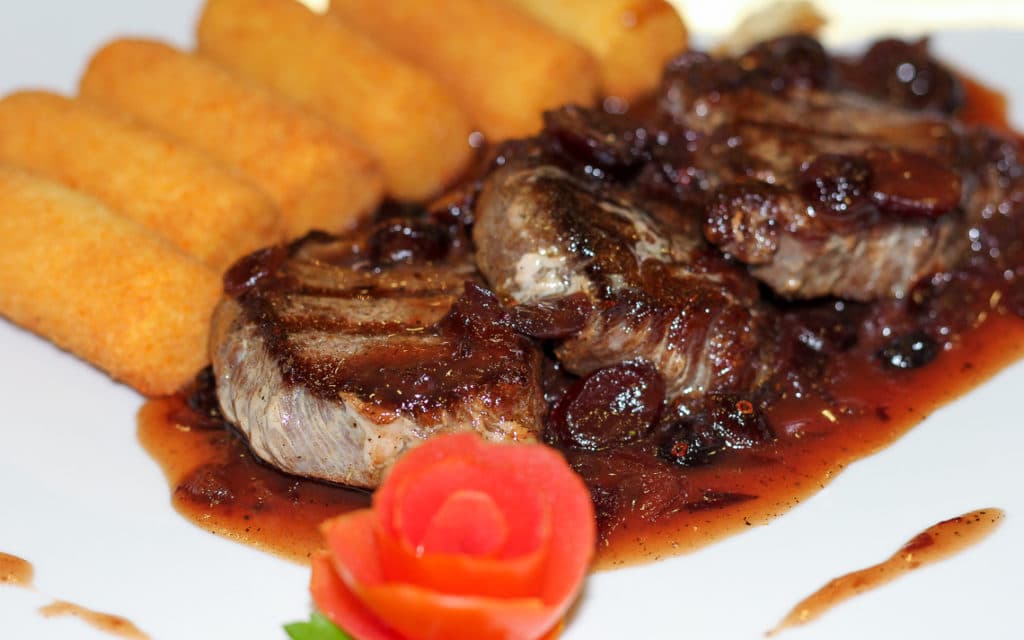 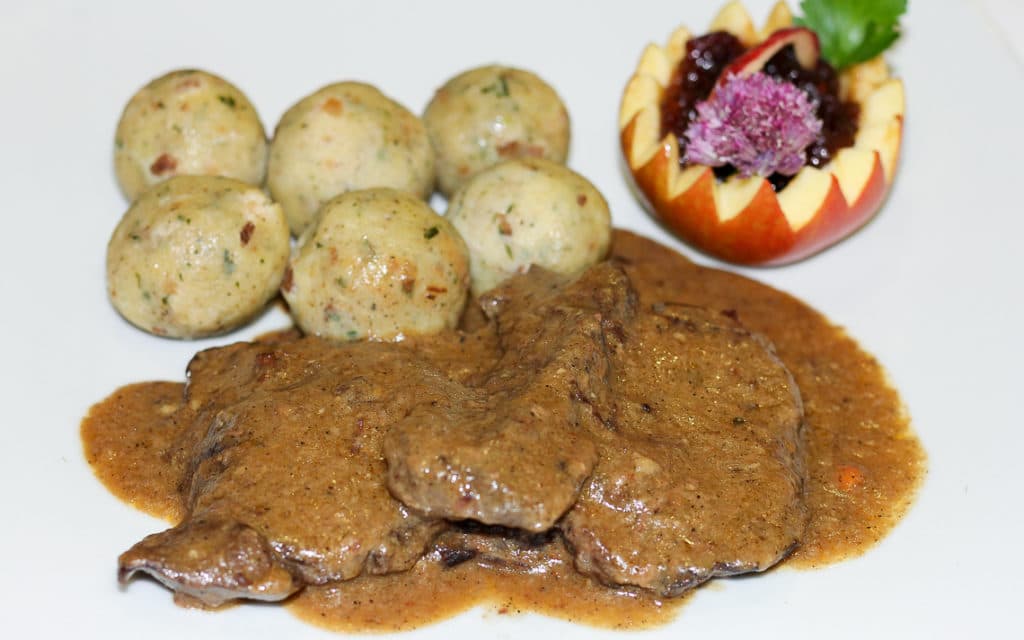 Blueberry strudel (only at Bitoraj) 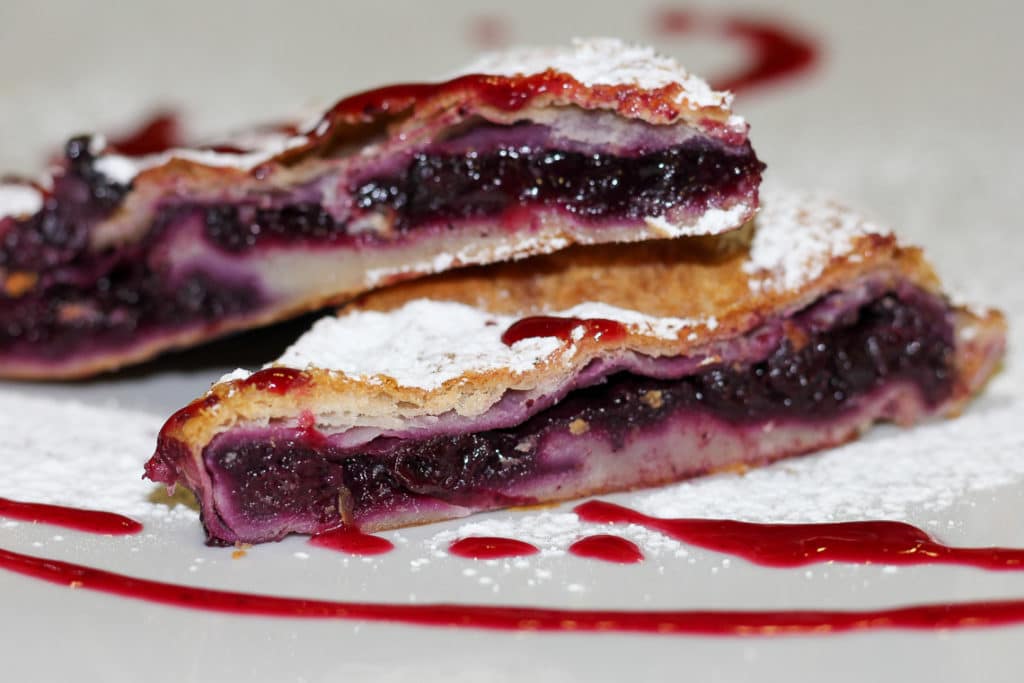 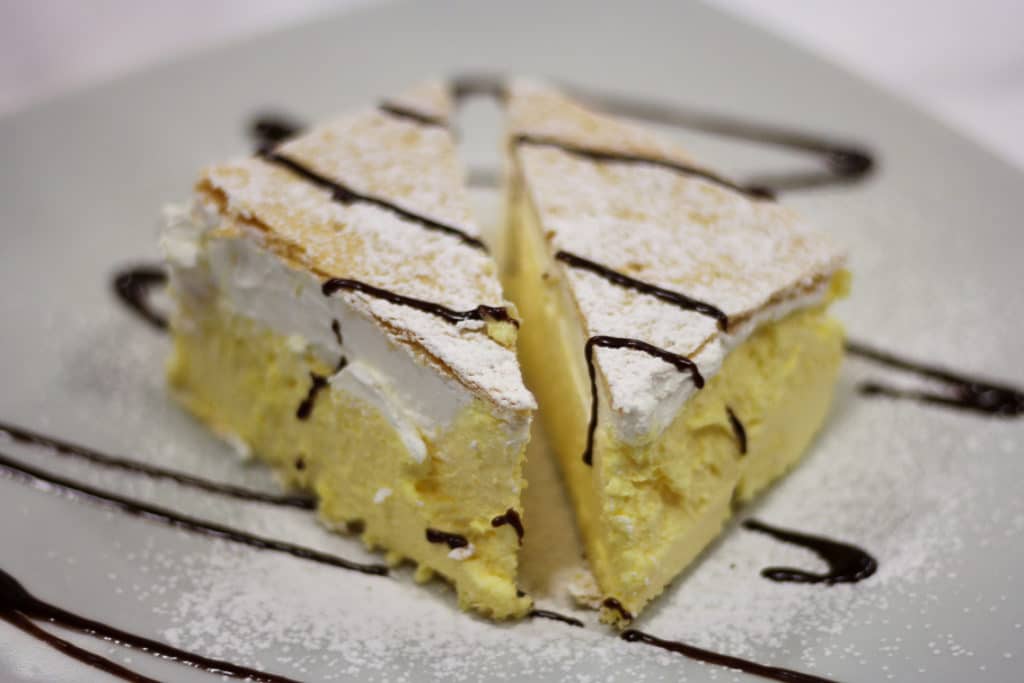 Big and busy, Rijeka has been a port city since Roman times, followed by 7th century Slavic domination, then German, Frankish, and Austro-Hungarian rule. As an important seaport for the Austrian Empire, a road from Vienna to the coast brought trade and development in 1725. In 1873, rail links ignited the tourism industry. After the fall of the Austrian Empire, a succession of ruling countries controlled the port until Croatia gained independence in 1991. A large Italian population remains, and the area still boasts fine examples of Baroque, belle époque, and Italianate architecture.

Primorsko-Goranska Kasetica is a tourism project that brings together producers of indigenous products of Kvarner county. The newly opened exhibition and presentation center of regional products provides an overview of Region’s main producers and knowledgeable staff to answer questions and provide recommendations on products and places to visit. They also hold numerous events, promotions, presentations, exhibitions, education and workshops, all with the aim of enhancing the visibility and recognition of both tangible and intangible heritage of the Primorje-Gorski Kotar County and the tourist destination of Kvarner. Visit the Kasetica to learn more about the local producers and taste some of their wonderful products. 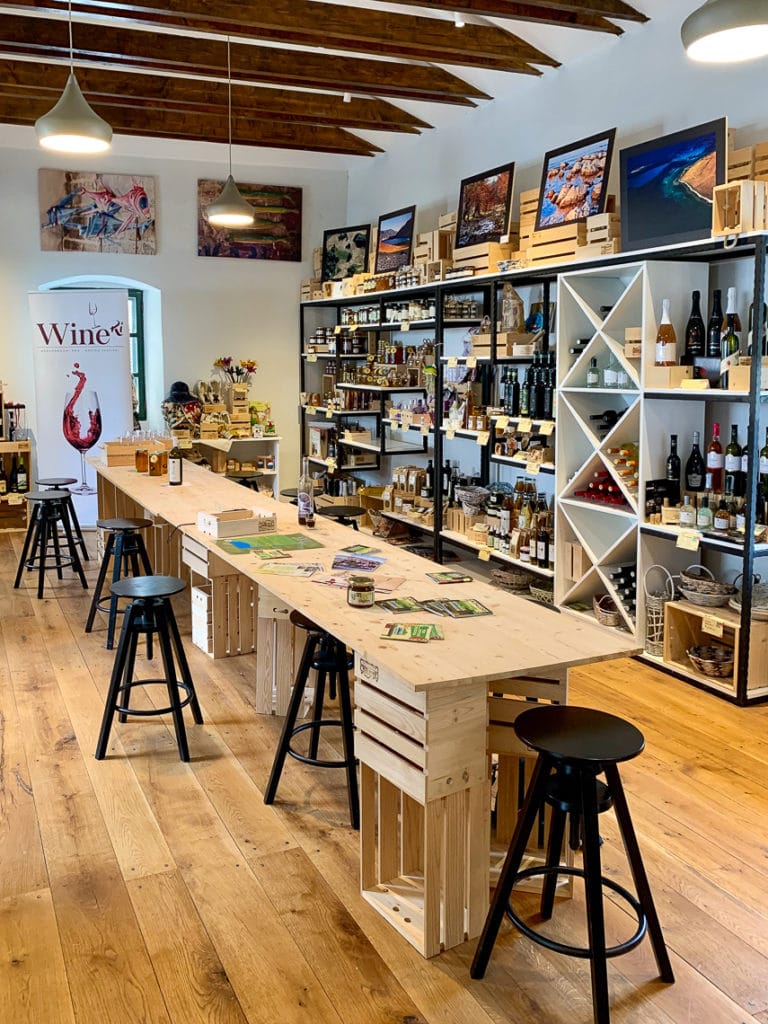 The ancient port city of Lovran is an intersect of sea, mountain, urban, and rural landscapes. Named for the laurel, the fresh evergreen used by Romans to adorn the heads of important citizens, Lovran is as diverse as it is beautiful. From the beautiful Adriatic Sea, to Mt. Ucka rising as backdrop to the city, to its narrow streets lined with ancient, 3-story buildings, to the pastoral rural areas just outside the city, it is a fascinating mix of old, new, urban, rural, mountain, and sea. That attraction was not lost on the Roman noblemen. Marcus Agripa built his summer home on the townsite back in the 1st century. Known for the Marunada festival celebrating Lovran’s harvest of sweet chestnuts, Lovran also celebrates Carnival. Zvoncari dancers sporting sheepskins and ramshorns encourage the arrival of spring, while driving out the villain of troubles known as Pust. Lovran also plans festivities around the asparagus harvest in April and an abundance of cherries in July.

Robert Benzia, Ganeum chef and owner, and the winner of the Gault&Millau  2020 Chef of the Future award, aims to bring guests closer to his vision of combining fine food, good wine and music. He has done a splendid job so far. The small restaurant is rustically decorated with colorful shelves behind the bar bringing color to the wooden decor. When you visit, try the chef’s tasting menu which is exciting and delicious. This “podrum za uzivanje” (wine cellar for enjoyment), as Robert calls it, truly delivers a memorable enjoyment. Here’s what we tried during our visit. 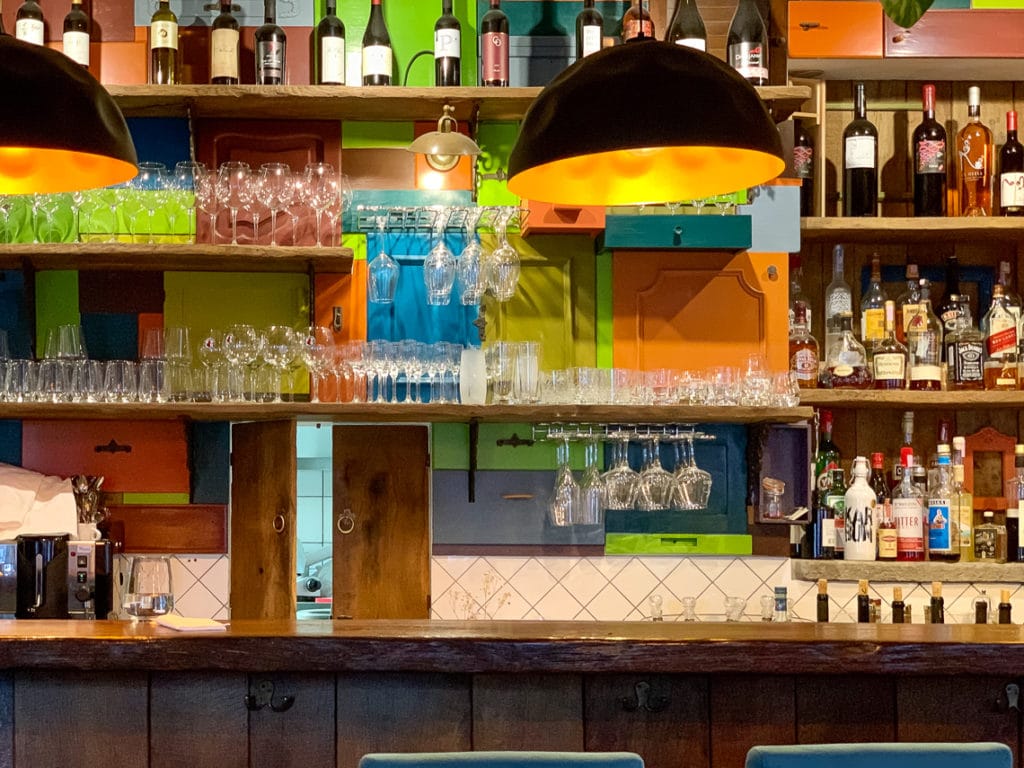 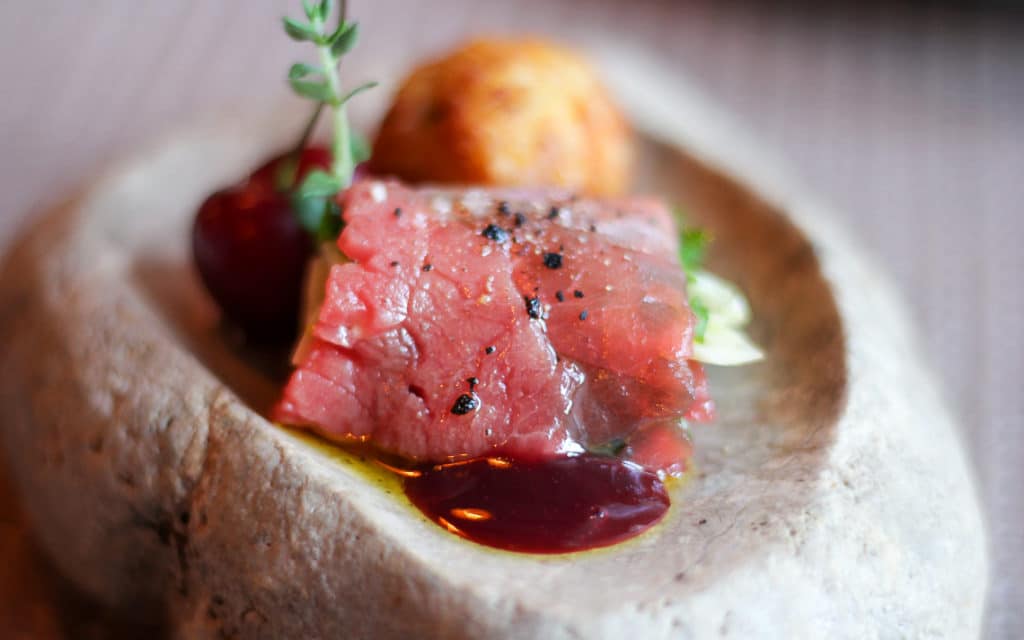 Short ribs (for kids – they loved it) 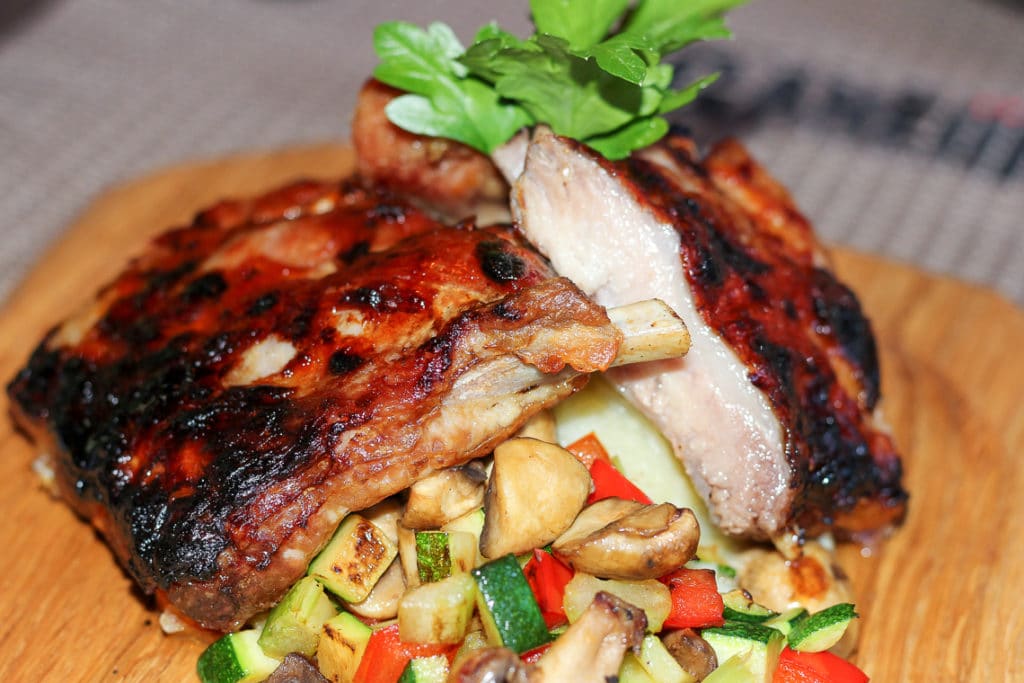 Fish with onion and wasabi 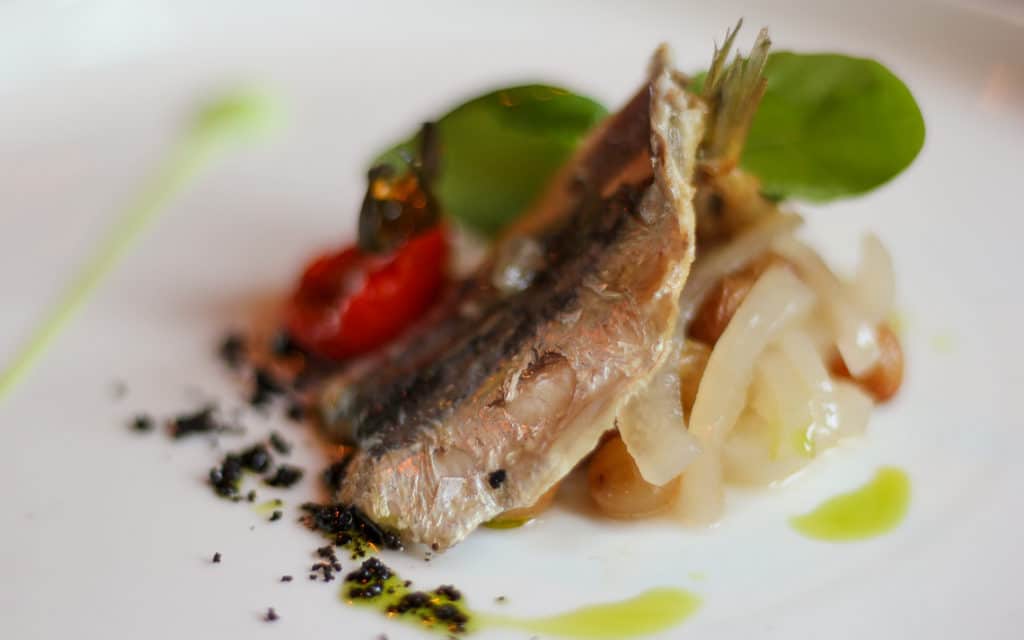 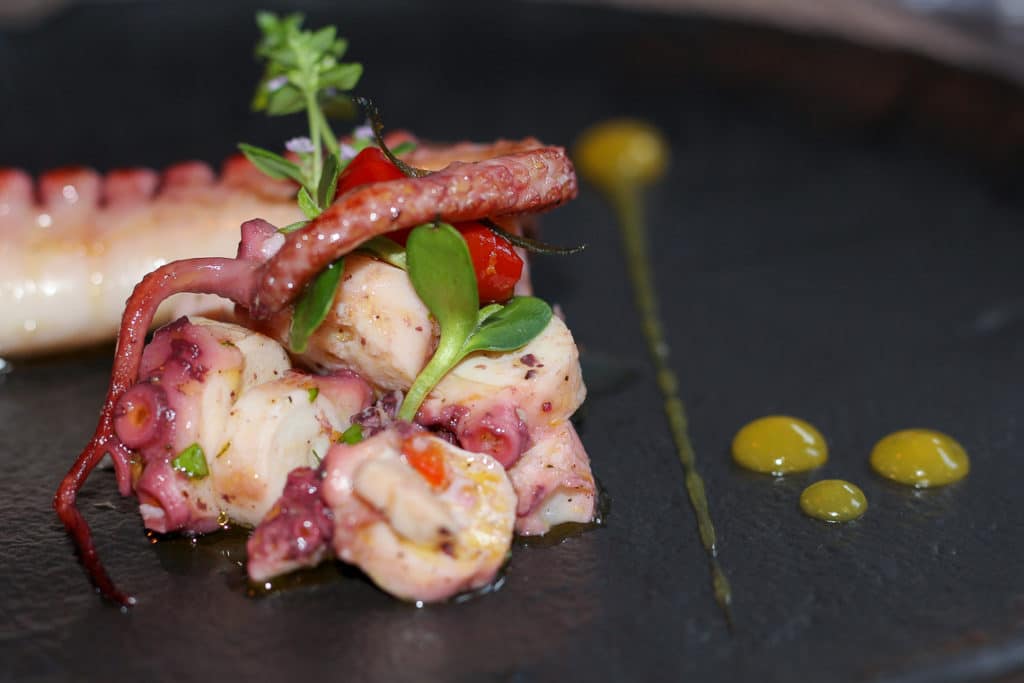 Fish with gnochi and pesto 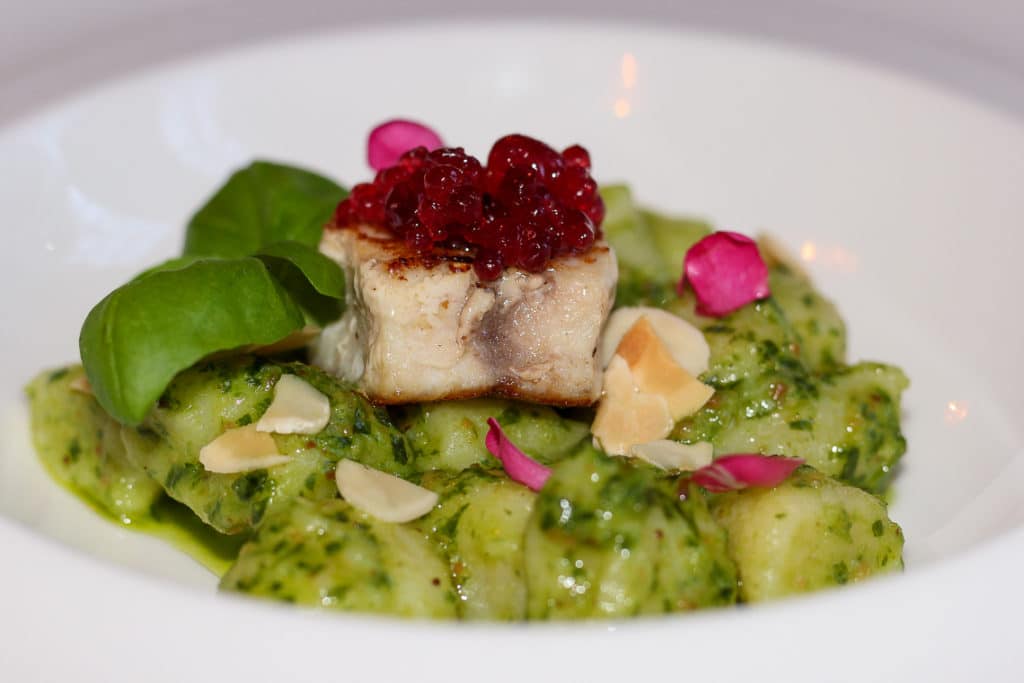 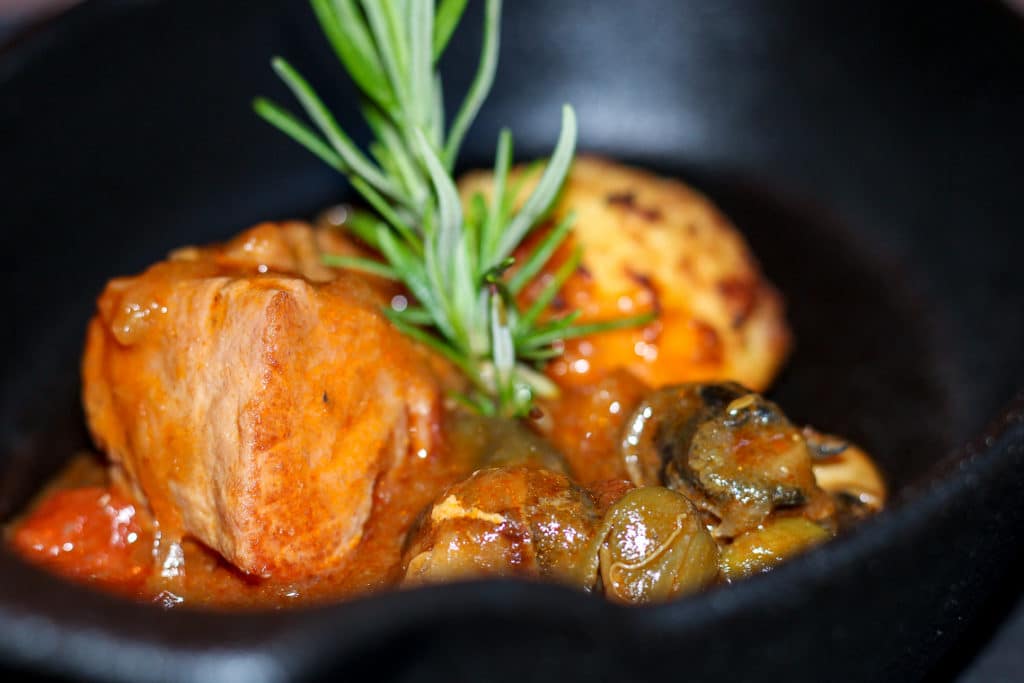 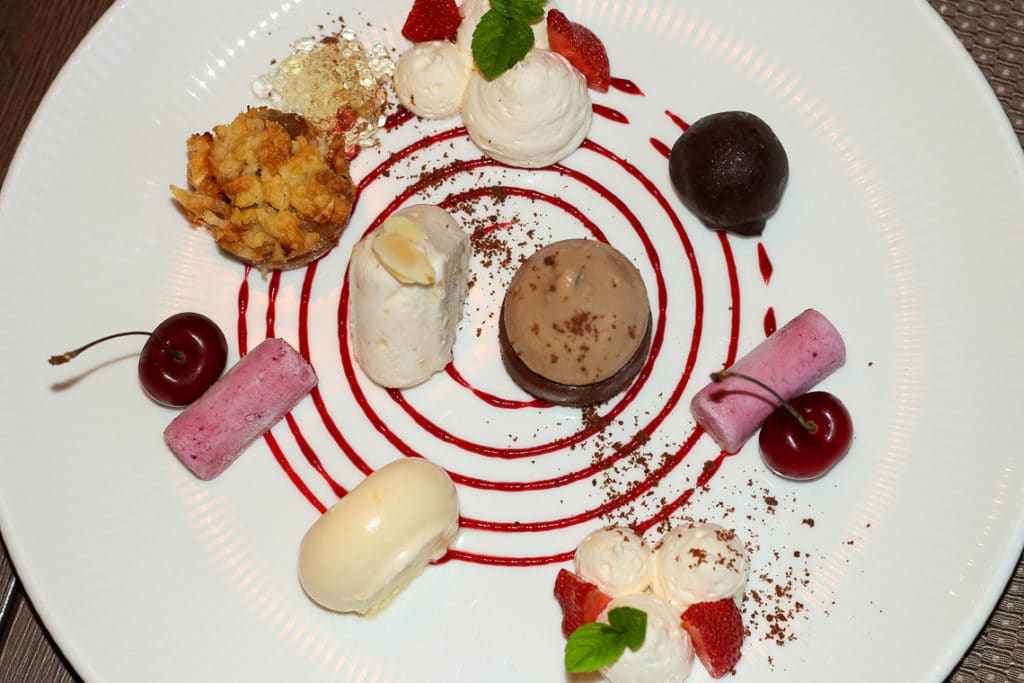 Inhabited since the Neolithic age, the island of Krk was settled by Liburians. The Roman Empire took over, and during the battles between Caesar and Pompey, became part of the Eastern Roman Empire. Walls were built to fortify the city against the Quadi and Marcomanni threats, but in the 7th century, Avars penetrated the city, followed by the Byzantines, Venetians, and Frankopans. Again captured by the Venetians, Austrian rule took over after the fall of Venice, followed by Italy, and Yugoslavia. Independence in 1991, and the fall of the Eastern Bloc countries brought tourism to life on Krk. Remains of ancient thermal baths can be found near the Franciscan monastery. Evidence of Glagolitic script documents indicates the use of the language during the Medieval period. Today Krk is connected to the mainland by one of the longest bridges in the world, built in 1980. Krk is a port and trade center with several cities on the island, including Krk, Malinska, Dobrinj, Punat, Omisalj, Vrbnik, and Baska. Krk Town, Punat and Baska, the main towns on the island, are all a short distance from the Valbiska ferry port connecting the island to the islands of Rab and Cres, as well as Brestova on the mainland.

While visiting Kasetica in Rijeka, Katunar wines stood out with their display of Muskat, Rose, Plavac Mali, and Zlahtina, a Malvasia-like wine produced only on Island Krk. Since we were already planning to visit island Krk, this was a perfect itinerary to add.

The wine archives on the Krk island confirm the hundred year old winemaking tradition of the Katunar family, which blossomed in the 1990s. Katunar family owns over 200,000 vines at two locations: in the Vrbnik field and in the basin of Baska. The winery, where the processing of the grapes, storage and filling in bottles is done, is located at the edge of the Vrbnik field. When visiting Krk, make a wine tasting stop at the Katunar Winery and get a souvenir of Zlahtina wine which you can’t find anywhere else. 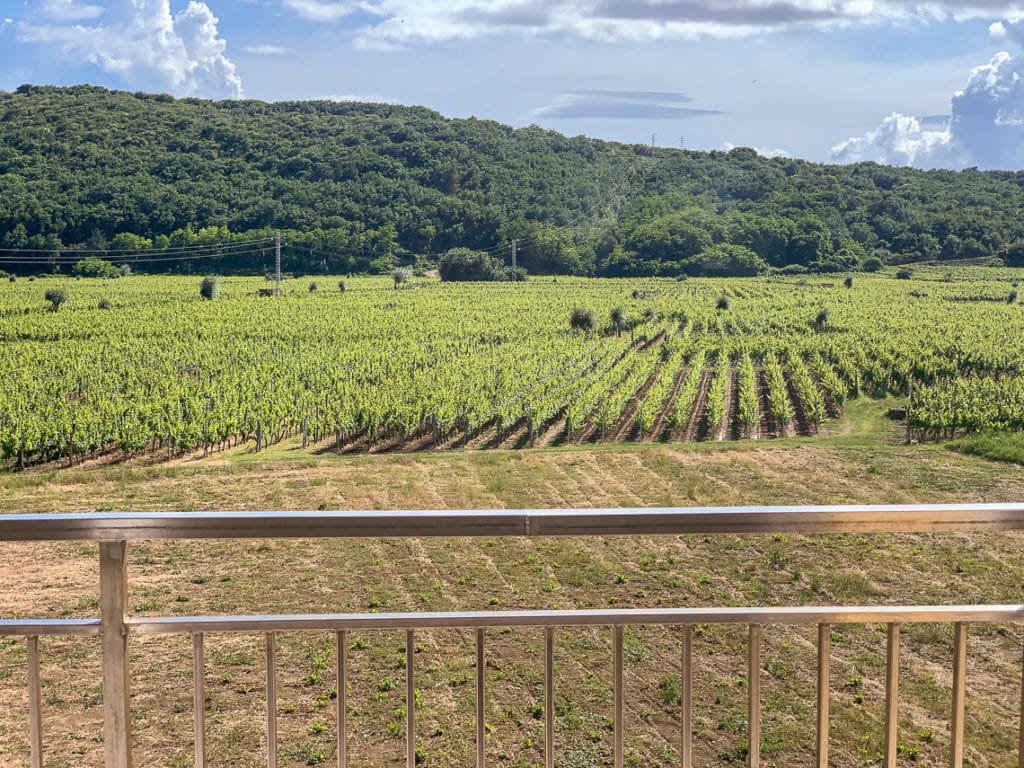 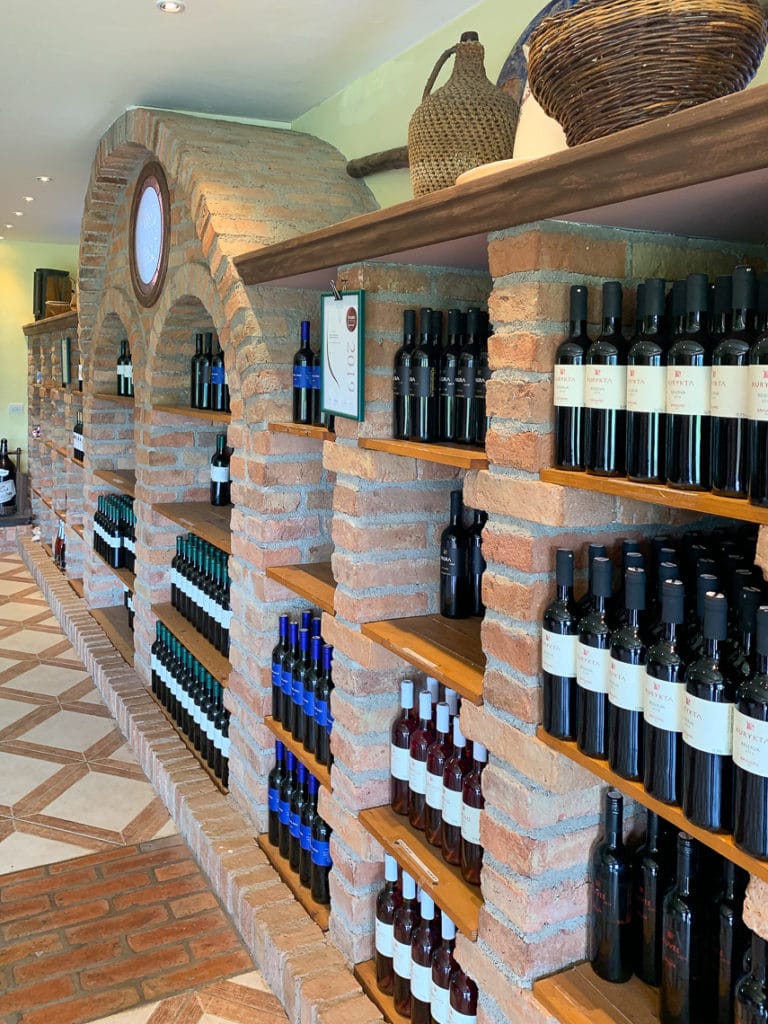 We could have not hoped for a better ending to the Kvarner trip than dinner at Restaurant Nada in Vrbnik on Krk island. The restaurant terrace is located on rock above the sea with stunning views. Konoba Nada has been continuously in business since 1974, when it was first started by grandma Nada. Although it has evolved over the years, the family hospitality has remained part of the restaurant culture. The restaurant has become one of the most recognizable restaurants in Krk’s gastronomy, and is complemented by their own Zlahtina wine, olive oil, and liquors. Enjoy the view, the fresh seafood, the exquisite dishes, and warm family atmosphere. Below are the dishes we enjoyed. 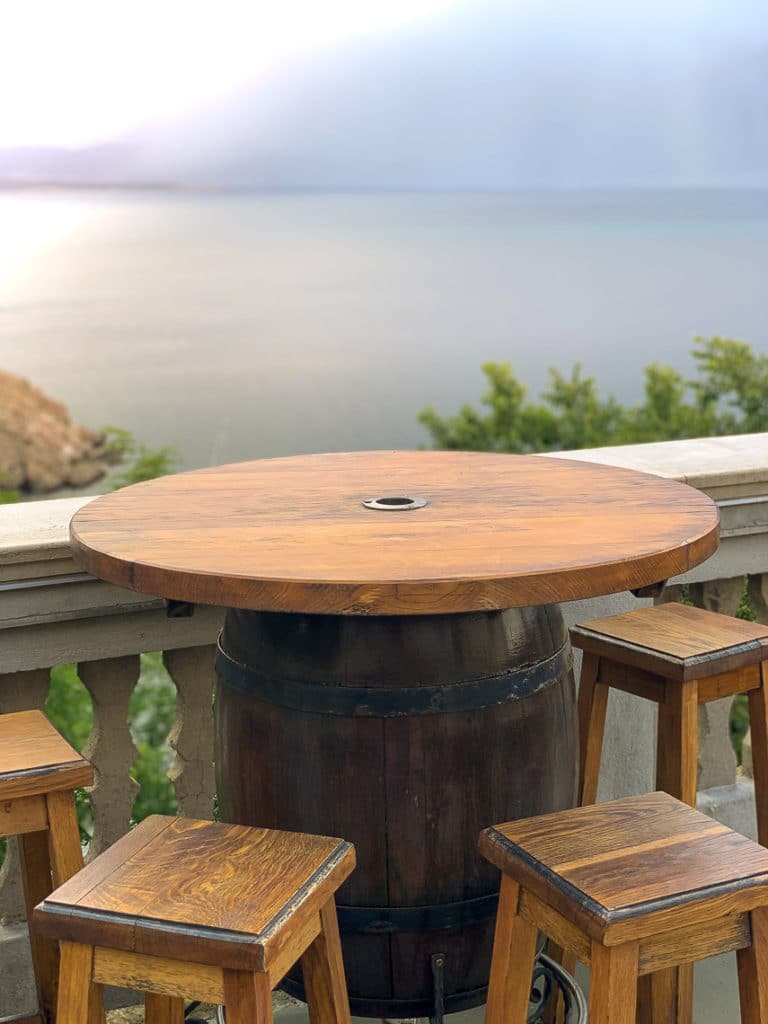 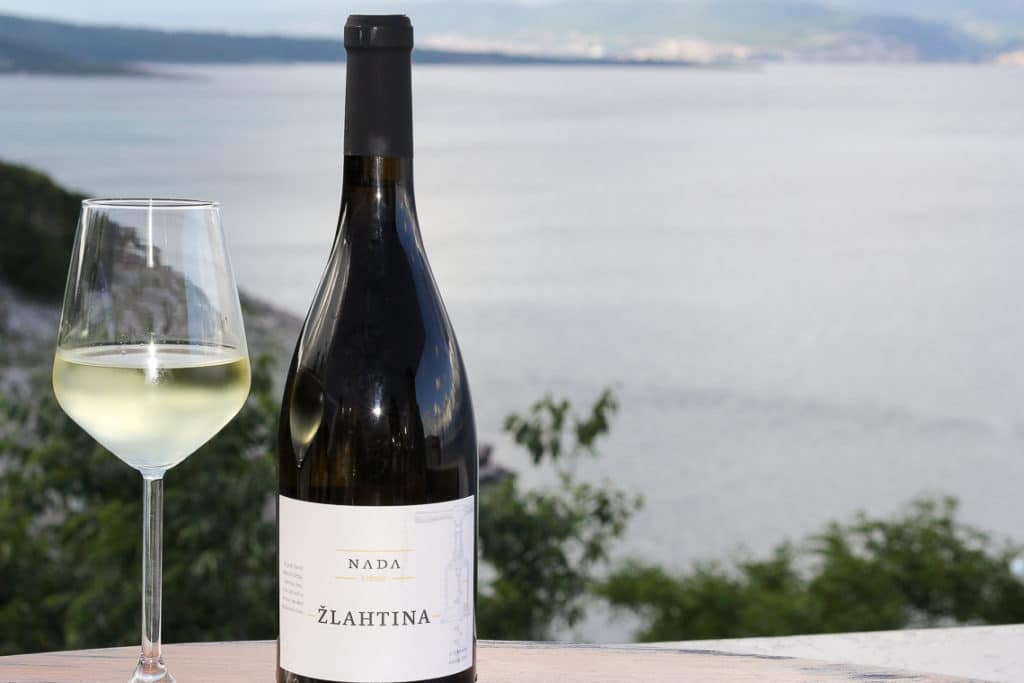 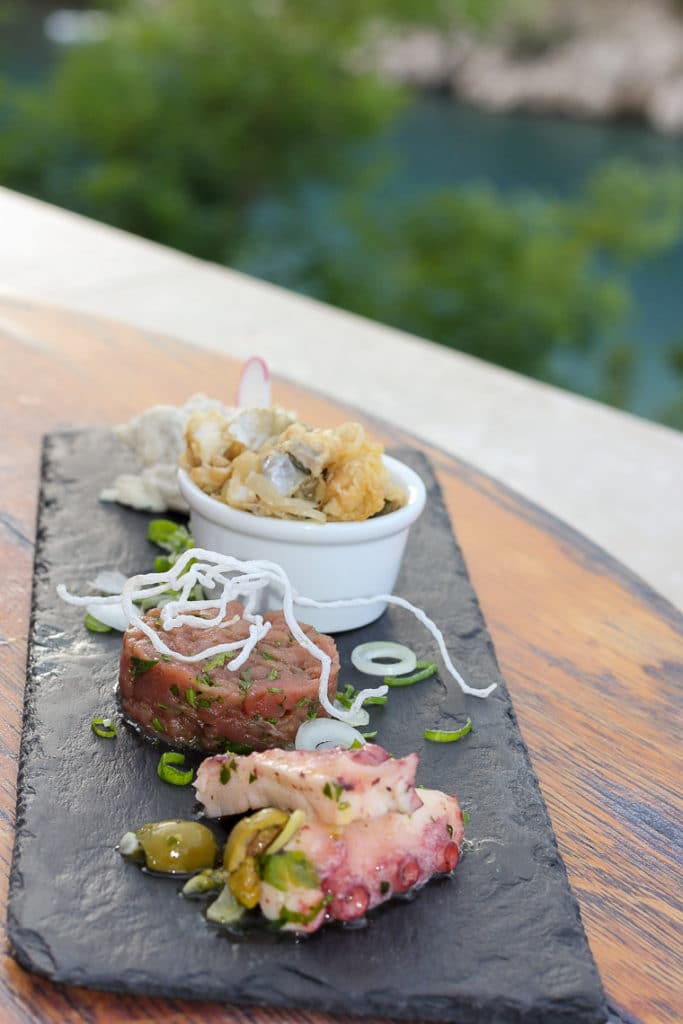 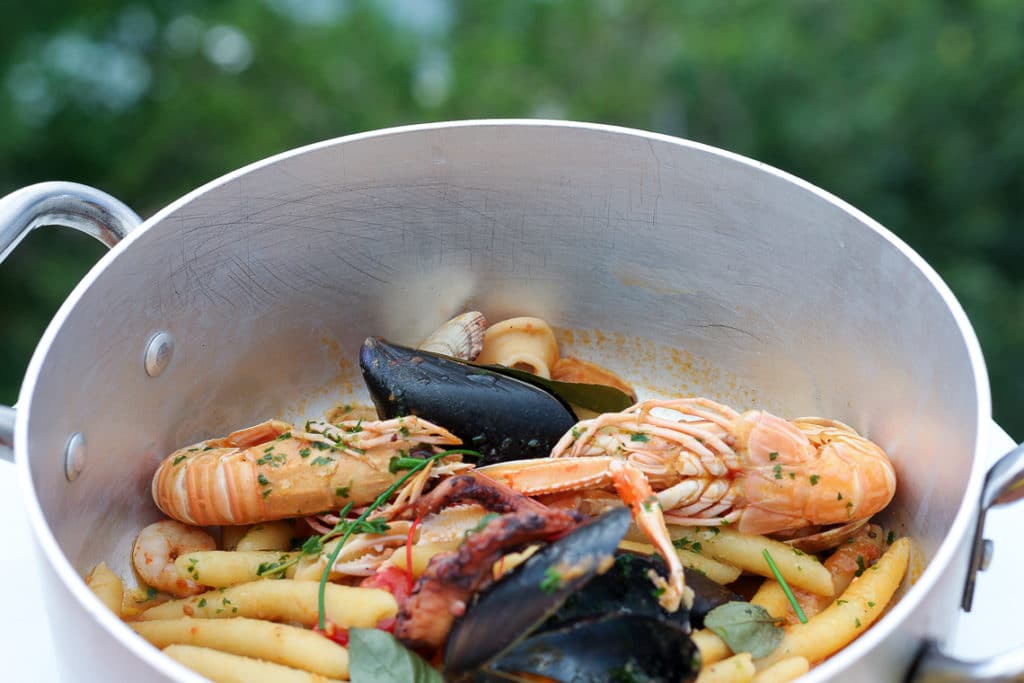 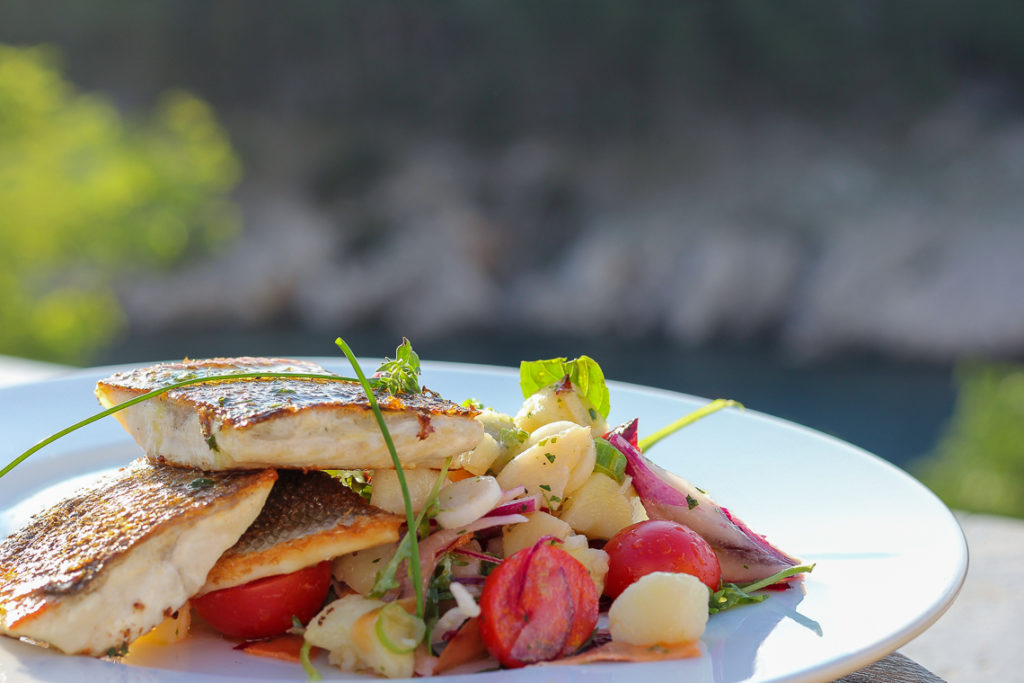 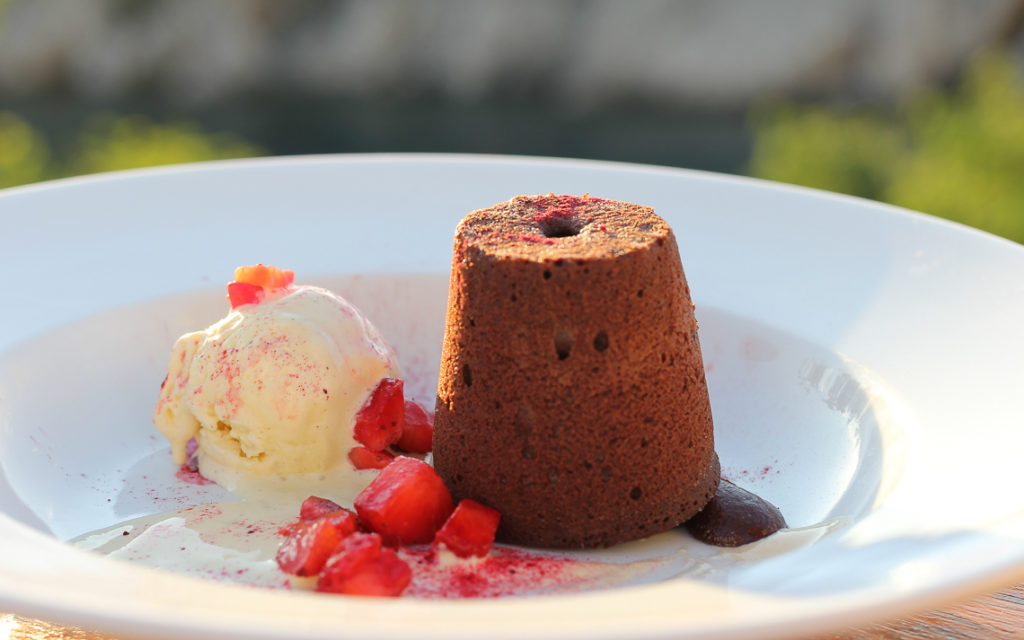 Have a wonderful trip to Kvarner! Tag us (@istriagourmet) and Kvarner Tourist Board (@visitkvarner) on Instagram with your favorite foodie pics in Kvarner.